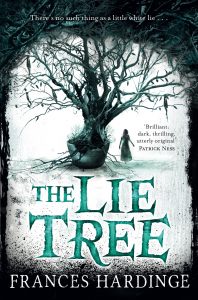 What would you be willing to do to learn the truth? On the outside, Faith is a proper Victorian young lady who knows her place. But on the inside, she longs to know the truth. Secrets surround Faith not least of which is the mystery of her father’s sudden death. Set in the years following the publication of Charles Darwin’s Origin of Species, Faith’s minister father straddled the line between science and religion. And Faith suspects that his death is more than mere accident. After going through her father’s books and papers, Faith finds something odd and intriguing: a tree. This is not just any tree, though. This tree tells the truth. First, you have to feed it with lies.

Frances Hardinge creates a relatable character in Faith. She struggles against the expectations of society and tries to remain true to herself. Faith must learn to rely on herself at every turn. Hardinge’s writing is excellent and she builds an intriguing yet unsettling world. Full of suspense, a little bit of magic, and a tenacious main character, The Lie Tree definitely delivers a satisfying read. Fans of Libba Bray and Cat Winters will enjoy this mysterious historical fantasy. Find it in Overdrive, the Libby app, or Hoopla.