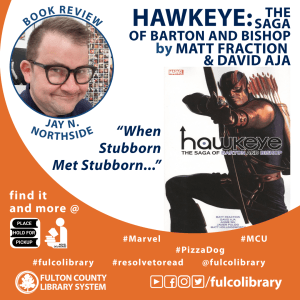 Looking for your next read? Check out Hawkeye: The Saga of Barton and Bishop by Matt Fraction & David Aja, reviewed by Fulco Library staff, Jay N.

These are some of the thoughts that likely went through the heads of Marvel audience members and readers in the past ten years since Jeremy Renner appeared in “Avengers”. Clint Barton had a long history in Avengers comics already but was still a relatively minor character, with a somewhat goofy costume, and unerring aim with an arrow. The movie character was much more plainclothes. But that same year writer Matt Fraction and artist David Aja began a new comic series with a completely new Hawkeye. “This is what he does when he’s not being an Avenger.”

With understated art and muted colors, Fraction took us home with Clint Barton to a New York apartment. There are no Avenger-Level Threats happening. Hawkeye is off the clock, right? And yet, he can’t avoid getting in trouble. And getting punched. Frequently. And he can’t help but help people. And dogs. Particularly an injured mutt who won’t turn up his nose at a pizza slice. Small-time gangsters begin harassing the neighborhood. The Tracksuit Mafia. Clint does what he can but they’re only the start of his problems.
Clint Barton likes to help, but he sure doesn’t like to receive it. Enter Hawkeye aka Kate Bishop. A young would-be hero who, as it turns out, is ALSO an exceptional archer. Clint says they can’t both be called “Hawkeye”. Kate concedes this and starts calling him “Hawkguy”. And THEN Madame Masque shows up and they’ve got a real villain to deal with, though this doesn’t stop their bickering. One old pro set in his ways, one upstart out to prove herself, both always certain that they’re right and they can do it better. A superhero team that’s equally the classic “mismatched partners” and “grumpy dad and snarky daughter”.

It's not just Kate busting on him though. Plenty of his coworkers appear to admonish him, including exes like Black Widow and Mockingbird who still find him lovable, but definitely still find him impossible to live with. He just can’t see any problem with how he lives his life! (even if he knows that if there weren’t a problem people would stop yelling at him all the time). Superheroes having problems with interpersonal relationships and self-awareness (and self-preservation) are common, it’s just never the main story. This three-year series, collected here in full, was both wildly creative in narrative techniques and continuously funny with its regular flawed people who also occasionally put on costumes and get taken hostage by megalomaniacs.

Only recently did the onscreen Clint finally start to merge with his published self in a new streaming series which also introduced Kate to the Marvel Cinematic Universe, along with a certain dog and a certain similarly-attired group of bros. It doesn’t really match the Clint Barton who’s been on movie screens for a decade, but when the story is this good and fun, who cares? Comics change people’s history all the time. Just enjoy! But please don’t get pizza on the library book.

Check out Hawkeye: The Saga of Barton and Bishop from your branch's shelves with your library card today!

Hawkeye: The Saga of Barton and Bishop