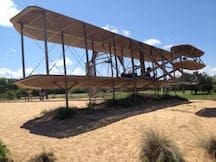 November is Aviation History Month, and this month accomplishments and milestones by men and women aviators are recognized.

Chronicled are some of the most memorable moments in Aviation History.

Wright Brothers and the First Flight - 1903

For more chronicle information please check out the link below.