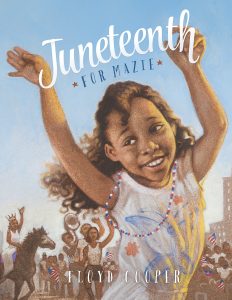 This poetic book celebrates and explores the historic tradition of African American liberation, from bondage and slavery. Little Mazie wants the freedom to stay up late, but her father explains what freedom really means in the story of Juneteenth, and how her ancestors celebrated their true freedom. Mazie is ready to celebrate liberty and freedom— the day her ancestors were no longer slaves. Mazie remembers the struggles and the triumph, as she gets ready to celebrate Juneteenth.

AARL Reference Resources about or by Floyd Cooper, opens a new window

Floyd Cooper, opens a new window has been honored with 4 Coretta Scott King Honors, 10 ALA Notables, and many more for his illustrations by the Coretta Scott King Award. Born and raised in Tulsa, Oklahoma, he received a degree in fine arts from the University of Oklahoma. In 1984 Cooper came to New York City to pursue a career as an illustrator of books, and he now lives in Easton, Pennsylvania, with his family.