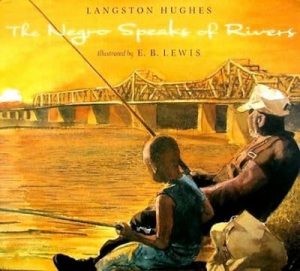 This vibrant book filled with watercolor illustrations accompanying Langston Hughes’ poems about the strength and courage of African American people, throughout history. Langston Hughes has long been acknowledged as the voice, and his poem, The Negro Speaks of Rivers— the song, of the Harlem Renaissance. Although he was only seventeen when he composed it, Hughes already had the insight to capture in words the strength and courage of black people in America.

AARL Reference Resources about or by Langston Hughes, opens a new window

AARL Juvenile and YA Reference Resources, opens a new window

Langston Hughes, opens a new window was a central figure in the Harlem Renaissance, the flowering of black intellectual, literary, and artistic life that took place in the 1920s in a number of American cities, particularly Harlem. The illustrations crafted by award-winning fine artist, E. B. Lewis., opens a new window Lewis is best known for his watercolor illustrations for children's books such as Jacqueline Woodson’s The Other Side and Jabari Asim’s Preaching to the Chickens: The Story of Young John Lewis.