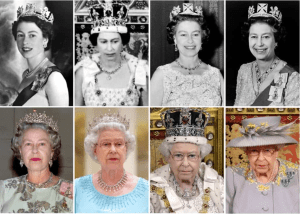 Who was Queen Elizabeth and how did she become a queen?

Elizabeth II (Elizabeth Alexandra Mary; 21 April 1926 – 8 September 2022) was Queen of the United Kingdom and other Commonwealth realms from 6 February 1952 until her death in 2022. She was queen regnant of 32 sovereign states during her lifetime and 15 at the time of her death. She leaves behind her children King Charles III, Anne, Princess Royal, Prince Andrew, Duke of York, and Prince Edward, Earl of Wessex. Her famous grandchildren: Prince Harry, Duke of Sussex, and Prince William of Wales, and more.

Queen Elizabeth Met with 13 Out of the Last 14 Presidents

The Queen's sense of humor is remembered: from off-mic quips to tea with Paddington (YouTube, Sep 8, 2022)