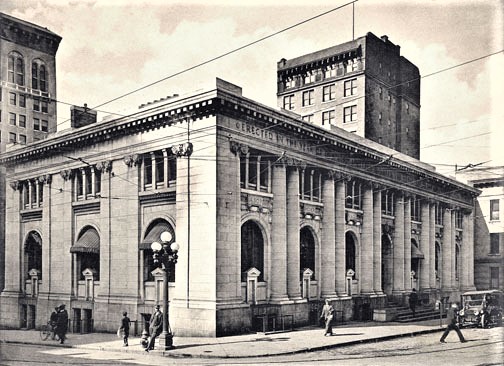 In Library1902 the Carnegie Library opened on land donated by the YMLA at the corner of Church Street (now Carnegie Way) and Forsyth Streets. The Carnegie Library was a classic building with an elegant marble façade and huge columns. The building dedication, engraved across the top of the building façade read “Erected in the Year of Our Lord Nineteen Hundred and Dedicated to the Advancement of Learning.” Under the dedication and above the front door and windows were seven bibliostones, with Carnegie over the door and one of the world’s great writers over each of the six windows.

Under the direction of librarian Anne Wallace, and with funding provided by Andrew Carnegie, the first library school in the south opened in Atlanta on September 20, 1905. The library school occupied space in the Carnegie Library until 1930 when it was moved to Emory University.

In 1935, the City of Atlanta and the Fulton County Board of Commissioners signed a contract under which library service was extended to all of Fulton County. The expansion was made possible by a joint grant by the New Deal Works Progress Administration (WPA) and the city government.

The Carnegie Library building was renovated twice, in 1950 and again in 1966. But, by the 1970s the rapidly developing city’s needs had clearly outgrown its ability to provide modern library services. Originally proposed by the library’s board in 1968, a bond referendum in 1975 provided funding for a completely new $19 million structure to be built on the site of the old Carnegie Library. The Carnegie Library was demolished in 1977 and staff and collections spent three years, 1977-1980, in temporary quarters on the top three floors of an office building at 10 Pryor Street.